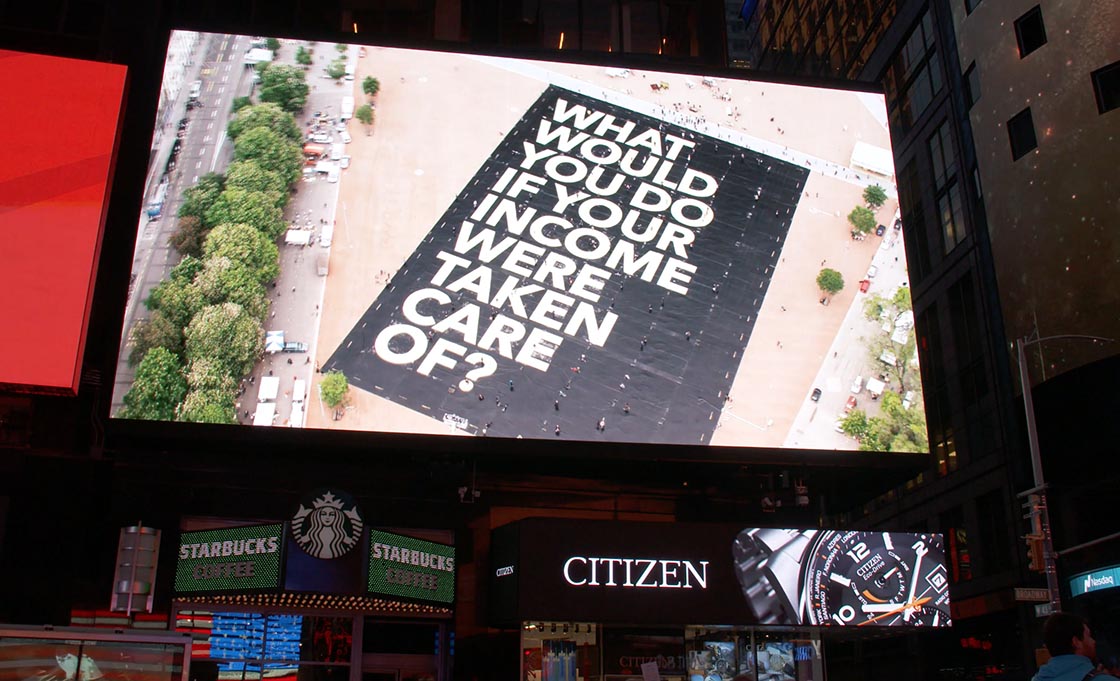 Since the 2008 financial crisis, big questions about inequality, rapid technological change, and the future of the welfare state have come to dominate politics across Europe and North America.

Almost a decade later, the initial response of governments to that year’s events (top-down austerity measures, tax breaks and bank bailouts) has been credited with fuelling a rise in populism. So it’s not hard to see why progressives across both continents are engaged in a wide-ranging search for alternatives.

Increasingly, centre-left politicians have started to give serious consideration to ‘citizen’s basic income’ as the cornerstone for a new social settlement in the twenty-first century. Only this week, Scotland’s First Minister Nicola Sturgeon included funding for research into the concept as part of her Programme for Government.

Elsewhere, Hawaii’s State Congress voted to consider the idea, backing a bill which asserted everyone on the islands was entitled to “basic financial security” to ensure that “no one’s left behind,” as technology radically reshapes the global economy.

But this fashionable concept has old roots. Some cite Ephialtes, the radical Athenian democrat assassinated in 461 BC, as the first figure to promote this kind of policy. Most agree that Thomas More’s Utopia (1516) included the first definitive call for guaranteed subsistence for all members of a society.

In more recent centuries the list of great minds who have advocated some form of basic income is impressive – including Thomas Paine, Bertrand Russell, Erich Fromm, Desmond Tutu and Martin Luther King.

But is there really a growing consensus that a scheme to distribute money to all members of society, as a right, is an idea that’s time has come? Why does this concept provoke so much fascination amongst legislators, economists, thinkers and activists today?

1. It couldn’t be more simple
For starters, it’s worth pointing out that the impact of citizen’s basic income would vary widely depending on how it was introduced. On top of that, there are also several policies easily confused with citizen’s basic income that some governments already pursue – such as minimum income guarantee or tax credits – that are in fact very different.

Citizen’s basic income stands apart from these due to its universality: by definition it refuses to dictate how the money is spent, and neither does it make the payment conditional on certain social behaviours or circumstances. The greatest strength of the policy is therefore its simplicity. This not only underwrites its flagship claim to be more affordable than means-tested welfare – it also holds out an easily-understood solution to multiple complex global issues.

Anticipating our release of a feature-length documentary, Free Lunch Society, the Moving Docs network has made this two-minute animation to explain how citizen’s basic income works. Have a look – it is that simple:

2. It’s radical, but not revolutionary
Across Europe there is widespread evidence that the two big ideas that have shaped society since the Second World War are past their sell-by date. The first, post-war ‘welfare capitalism,’ has eroded to varying degrees in the face of globalisation. The second, the turn-to-market liberalisation and a belief in ‘trickle-down’ economics, looks increasingly unsustainable as ever more wealth is concentrated in an ever smaller number of hands.

Recent bestsellers on wealth and inequality, such as The Spirit Level by Wilkinson and Pickett and Thomas Piketty’s Capital in the Twenty-First Century, have succeeded in popularising the idea that gross levels of inequality have a negative impact on all aspects of society and are bad for capitalism itself.

Citizen’s basic income, which has been piloted in a number of countries at sub-state level, seems to offer a direct and immediate solution to the problem of ever more unequal distribution of wealth and stagnant wages. It could also be implemented using current state structures: albeit with significant reforms and adjustments on tax and spending priorities.

3. The world of work is changing, fast
Last year a Harvard economist estimated that the introduction of driverless vehicles could result in the loss of 5 million jobs in the USA.

Such headline figures have focused attention on the imminent possibility of major advances in automation technology putting large numbers of people out of work.

In reality, the impact of automation may be more gradual and nuanced, but there is little doubt that, from low-pay manual jobs to the white-collar professions, machines will play an increasingly significant role in the workplace. That means less paid work.

But less work isn’t the only challenge. There’s also been a rise in what David Graeber has described as “bullshit jobs” – in which more and more people find themselves in unfulfilling service sector work that has no socially useful or productive function in society.

Politicians are therefore eyeing these immense social problems on the one hand and the possibility of a transformative shift in how people relate to work on the other.

Behind this picture sit old questions that the post-war welfare state could never get to grips with. What about all the work – such as caring for the elderly, raising children, emotional support and community activism – that has traditionally been unpaid?

The politics that built the welfare state was founded on the old-fashioned ideal of the heroic male working-class breadwinner engaged in tough manual labour. This model is not only out of place in an era of expanding gender equality, it was also reliant on industries that trashed the environment, creating the current climate crisis. This has led prominent citizen’s-income proponent Guy Standing to note that the citizen’s basic income would encourage “reproductive” work such as caring, as opposed to “depletive” work, that has a negative impact on the planet, such as heavy industries.

4. People from across the political spectrum support it
One of the most surprising things about citizen’s basic income is that it draws support from both the left and the right. Some theorists have even described it as a “grand compromise” between the two opposing ideologies.

By cutting state bureaucracy and a range of complex means tested programmes, it appeals to the libertarian ideal of individual freedom and a small state.

In most discussions of citizen’s basic income, these “needs” are usually defined as sitting at around half a country’s median disposable income, or the funds necessary to maintain basic financial security and remain above the poverty line – enough for food, housing, utilities and so on.

5. People from across the political spectrum oppose it
An idea that unites radical anti-capitalist thinkers, such as Paul Mason and Naomi Klein, with Silicon Valley billionaires like Elon Musk and Mark Zuckerberg, is not without an equally diverse field of detractors. In 2015 centre-right New Zealand Prime Minister John Key spoke for many critics when he derided basic income as nothing more than “a system that is barking mad.”

It’s not hard to see why the mainstream right is instinctively hostile to citizen’s basic income. It’s a concept that explodes the idea of traditional work incentives, makes a claim of right to a share of the “common wealth” for all and promotes the most far-reaching form of state intervention since the Second World War.

However, there is also a strong strain of opposition on the left. This is often grounded in trade unions, which have been wary of a move that could hand organised labour’s traditional bargaining power on wages to a small governing elite. It would also be an obstacle in path of the left’s traditional political goal of full employment.

Yet the most common objections made in opposition to basic income are practical. Many insist the costs would always be prohibitive, others that it would lead to disastrous inflation, that it would encourage laziness, or that it could be easily manipulated by cynical governments.

But perhaps the reason citizen’s basic income is so appealing is precisely because it is unprecedented and utopian.

As Europe’s current poster boy for basic income, Rutger Bregman, is fond of pointing out: all social change is utopian – until it happens.