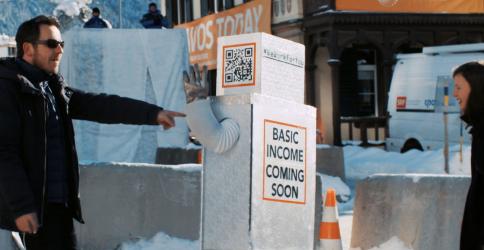 Globalization, automation, Donald Trump. The middle class is falling apart. One hears talk about the causes, rather than about solutions. Time for a complete rethink:

An unconditional basic income means money for everyone – as a human right without service in return! Visionary reform project, neoliberal axe to the roots of the social state or socially romantic left-wing utopia?

Depending on the type and scope, a basic income demonstrates very different ideological visions. Which side of the coin one sees depends on one‘s own idea of humankind: inactivity as sweet poison that seduces people into laziness, or freedom from material pressures as a chance for oneself and for the community. Do we actually need the whip of existential fear to avoid a lazy, depraved life in front of the TV set? Or does gainful employment give our lives meaning and social footing simply because we haven‘t known anything else for centuries? And because we‘ve never all had the freedom to self-actualise in other ways?

That basic income is a powerful idea is indisputable: land, water and air are gifts of nature. They are different from private property that humans create by their individual effort. However, when we receive wealth from nature, from the commons, then that wealth belongs to all of us equally.

From Alaska‘s oil fields to the Canadian prairie, from Washington‘s think tanks to the Namibian steppes, the film takes us on a grand journey and shows us what the driverless car has to do with the ideas of a German billionaire and a Swiss referendum. FREE LUNCH SOCIETY, the first international film in cinemas about basic income, is dedicated to one of the most crucial questions of our times.